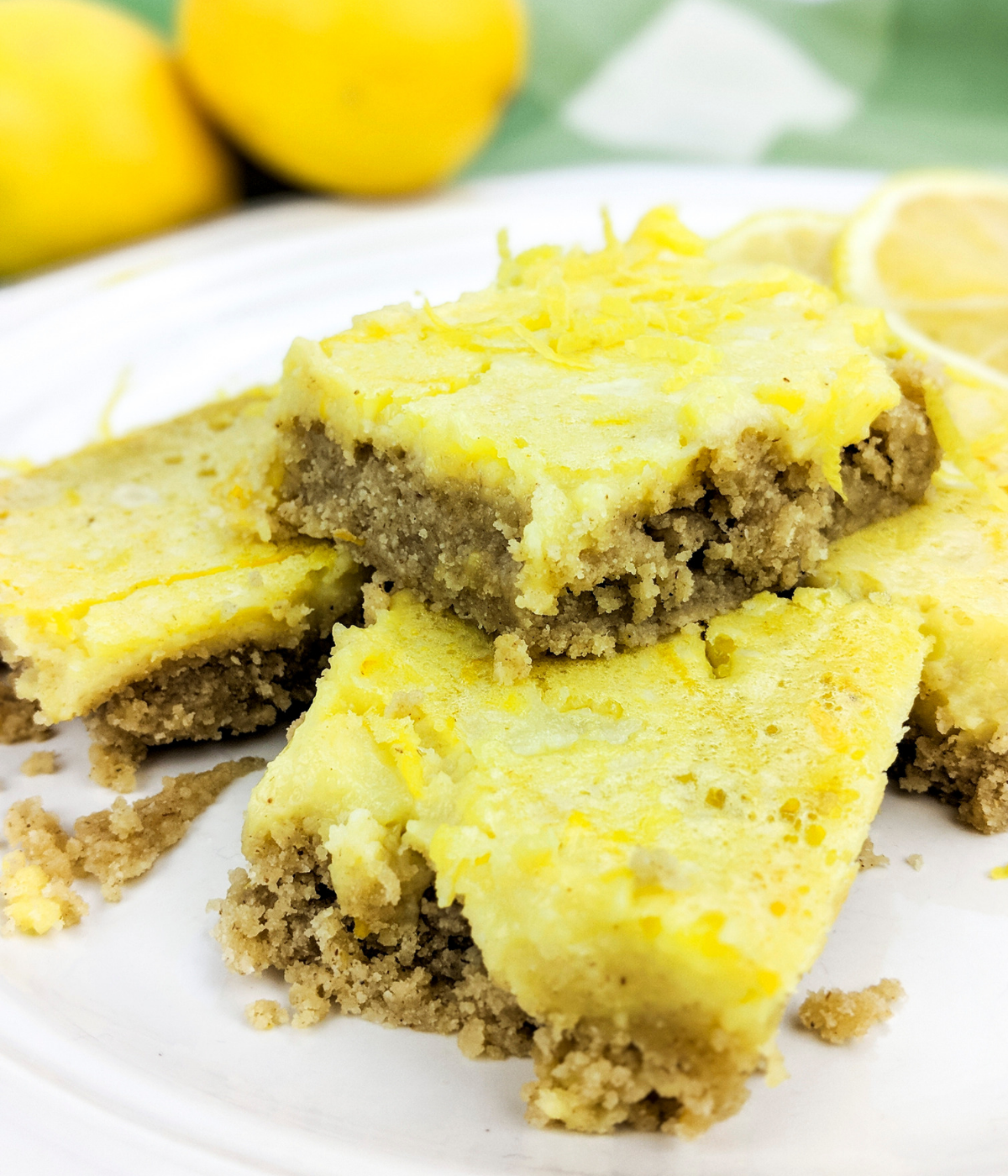 Spring is the time of year you can put lemon on anything and call it a seasonal meal. Lemon asparagus, lemon fish, lemon infused soup. Lemon frappucinos, lemon spritzers, lemon meatballs…it’s like the pumpkin spice of spring. Lemon desserts, however, take the cake (har har) for springtime treats. Gone are the rich, velvety chocolate things of winter (don’t worry–they’ll be back), and the time has come for light, creamy, palate-cleansing treats using our favorite Plant Paradox citrus juice!

I have three recipes for lemony springtime desserts that are perfect for serving at Easter brunch or any springtime gathering. The best part is these can go right into summer picnics and gatherings, too. Lemon treats are the white pants of desserts–they don’t go out of style until Labor Day weekend. Then, on September 1st, any lemon out past its curfew turns into a pumpkin (with spice).

Gluten baking can be a pain. You usually need a combination of nut/root flours to hold a recipe together. Some of these lemon desserts call for three different flours. I apologize in advance if you’re new to this and don’t have any in your cupboards. But, might I say, making fluffy lemon bars or lemon pudding cakes is a pretty dang good reason to stock up on flours.

You can check out my pantry checklist for a complete list of lectin-free baking staples. Otherwise, I highly recommend going through Thrive Market to buy flours and sweetener. They have their own generic brand of cassava, coconut, almond, and arrowroot flour, plus this sweetener, which is what I used in all of these recipes. It’s all blessedly less expensive than going to my local health food store. If you’re not a member yet, you can also get 25% off your first order below. These light and fluffy lemon treats have a perfectly-crumbling “graham cracker” crust. They are great for…eating all by yourself. Just kidding–you can share one square with your significant other.

If you’re going to bring it to a party, though, it is a party foul to show up with one corner of the 9×13 dessert missing. Solution: precut them into squares and lay them beautifully on a cake plate, dusted extra lemon zest or powdered sweetener. No one will know you overindulged in your taste-testing duties as pastry chef.

I had a honeymoon phase with tigernut flour, and then stopped using it for a while. Not because it’s not good–it’s just other flours are easier to find. However, one thing tigernut flour is perfect for is making a graham cracker-style crust. It’s rich, nutty, slightly sweet flavor makes the best crumbling crusts that pair so well with the fluffy lemon filling. The brand I normally use has long been out of stock, so I recommend Anthony’s for this recipe.

PREHEAT oven to 350 degrees F. Combine the ingredients for the topping in a food processor. Pulse until wet crumbs form. If the mixture is too wet–turns into a ball or sticks to your hands–incorporate additional arrowroot flour, 1 tablespoon at a time (no more than a 1/4 cup).

BUTTER a 9×13 pan (line with parchment paper if desired). Starting in the middle, press crust mixture into the pan and push it evenly out to all sides. Bake for 15-20 minutes.

MEANWHILE, wipe the food processor clean and add the ingredients for the filling. Process until well-combined and then pour over the crust. Bake another 15-20 minutes, until top is firm and cracks form. Let cool to room temperature before slicing and serving. Dust with confectioners sweetener, if desired.

Lemon “Egg” in a Bowl

They’re not really eggs (well, the lemon curd is made of yolk)–they just look like eggs. It’s a clever coconut cream and lemon curd dessert that’s very simple to make. This is what you make when you want a cute Pinterest-worthy dessert, but don’t have the skills to make a bunny butt cake or a Peeps diorama with edible furniture and grass. All you do is whip up some coconut cream with a little sweetener, spoon into individual ramekins and make a well for the delicious homemade lemon curd.

I first tried this recipe with the regular monkfruit sweetener. It dissolves when heated, but then re-crystalizes upon cooling in the fridge. I didn’t mind it, but I tried it with superfine granules and had better results. There are two methods of achieving this: you can buy a superfine sweetener like the one in this baker’s bundle or you can grind the regular granules in a spice grinder. I suggest the latter because grinding erythritol in a spice grinder is SUPER AWESOME (I won’t spoil the surprise, just try it). Measure the amount called for in the recipe before grinding.

MAKE the lemon curd by combining egg yolks, sweetener, lemon zest, and lemon juice in a heat-proof bowl or double boiler pan over 1 inch of simmering water. Stir with a wooden spoon until mixture thickens and resembles applesauce.

REMOVE from heat and stir in the butter, a little bit at a time, allowing it to melt. When all the butter is incorporated cut a piece of parchment paper to the size of the bowl top and lay it directly on top of the curd. Refrigerate for at least 3 hours.

MAKE the whipped cream by beating the coconut cream or whipping cream with the sweetener on medium-high speed in a chilled bowl until soft peaks form. Spoon cream into ramekins or dessert bowls and shape to look like a fried egg. Use a tablespoon to make a “well” in the center.

This is one of the most fun desserts to make with kids, because it’s super scientific (and delicious and mini–all things kids like). You make one lemon pudding mixture and then pour it into individual ramekins (that’s not the scientific part). Then you bake them in a water bath that reaches halfway up the sides of the ramekins. The batter that bakes below the water line remains a pudding-like consistency, while the batter that bakes above the water line transforms into a cake-like consistency. I got the idea for this from Tyler Florence, but I’m telling ya, this is like Bill Nye stuff here.

I still think baking with cassava flour is the closest consistency to wheat flour as any one grain-free flour. I use the Thrive Market generic now, but I also swear by Otto’s (in fact, I have a suspicion the TM brand is Otto’s repackaged). Cassava flour is notorious for being gritty, but this brand has never had that consistency for me. I’ve used it in other delicious cakes and baked goods:

PREHEAT oven to 325 degrees F. Generously grease 4 1-cup ramekins with the butter and lightly sprinkle with sweetener. Combine the measured sweetener, egg yolks, coconut milk, lemon juice, and lemon zest in a large bowl and beat with an electric mixer until well combined.

SIFT together cassava flour, coconut flour, almond flour, and sea salt in a separate bowl. With the mixer on low speed, slowly add to the wet mixture, continuing to mix until combined.

BEAT egg whites in a separate bowl until stiff peaks form. Gently fold a little bit at a time into the main mixture. Divide evenly amongst the ramekins.

PLACE the ramekins in a glass baking pan and fill the pan with water until the water line is halfway up the sides of the ramekins. Bake for 45 minutes until the tops are firm and golden brown. Allow them to cool for 10 minutes and then carefully invert onto a plate. Cool to room temperature or place in the fridge, covered, and serve with fresh seasonal berries.